EWTN NEWS / REALCLEAR OPINION RESEARCH POLL: CATHOLICS IN KEY BATTLEGROUND STATES ARE FOCUSED ON THE ECONOMY AS THE MIDTERMS APPROACH 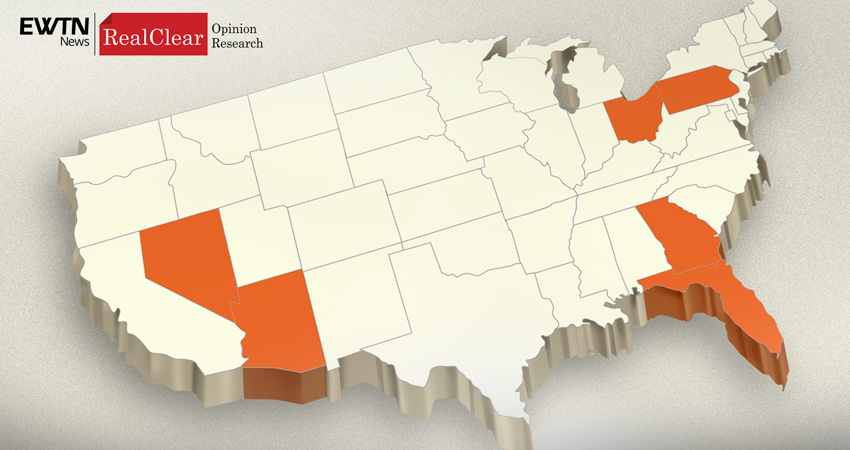 An exclusive poll of likely Catholic voters in the six battleground states of Arizona, Florida, Georgia, Nevada, Ohio, and Pennsylvania, has found that a majority of Catholic voters consider the biggest issue facing the country ahead of the 2022 midterm elections is the economy. Catholics also disapprove of the job that President Joe Biden is doing as president and dedicated Mass attending Catholics are poised to be a crucial voting group in deciding who will win control of Congress.

According to the findings of a new EWTN News/RealClear Opinion Research survey in the weeks before the 2022 midterm elections, large majorities of likely Catholic voters across six key battleground states – Arizona, Florida, Georgia, Nevada, Ohio and Pennsylvania – consider the economy, including jobs, inflation and rising interest rates, to be the most pressing issue facing America. In the hotly contested state of Georgia, for example, 67.1% of Catholic voters view the economy as most important, while in Florida, the issue rises to 67.6%.  Overall, Catholics in the six states rank the economy most important by an average of 63.1%. The economic concerns of Catholic voters dwarf every other issue, including immigration and border security (11.4%), abortion (7.3%), climate change (7.2%), healthcare (4.5%) and crime (3.7%).

This third and final EWTN News/RealClear Opinion Research poll for the 2022 elections was conducted by the Trafalgar Group from October 14-18 and surveyed more than 500 likely Catholic voters in each of six battleground states. It has a 4.1% margin of error, at a 95% confidence level.

The focus on the economy by Catholics is a significant element in another major finding in the poll: President Biden faces strong disapproval among likely Catholic voters in six crucial battleground states, even as Republican candidates in the six states polled are either in the lead in Senate and Governor races or are competitive against their Democrat rivals.

In each of the battleground states, President Biden suffers from strong disapproval from among Catholic voters, with an average disapproval across the six states of 62.2% and an average approval of 35.4%. Significantly, 57.5% of likely Catholic voters strongly disapprove of his job performance while only 12.2% strongly approve. Four of the states (Arizona, Georgia, Nevada and Pennsylvania) surveyed in the poll were carried by Biden – albeit very narrowly – in the 2020 presidential election, and in all four he is now confronting an uphill struggle to win back disaffected Catholic voters. In Georgia, he has an overall disapproval rate of 68.3% among likely Catholic voters.  Similarly, in Arizona, 58.5% of Catholics disapprove, in Nevada 63.3% disapprove and in Pennsylvania, 56.5% disapprove. In two of these battleground states that were won by Donald Trump, Florida and Ohio, the president faces an overall disapproval of 61.4% and 62.4% respectively.

While the well-documented gulf that exists between active daily or weekly Mass attending Catholics and those who do not attend regularly remains in this new survey, there is a consensus of disapproval among all Catholics for the job President Biden is doing. However, the president’s strongest source of Catholic disapproval is among those who attend Mass daily or at least weekly. In Pennsylvania, his job disapproval among daily and weekly communicants is more than 70%, while his average approval among Catholic voters who attend only yearly, or less, hovers around 45%. Similar numbers are found throughout the battleground states, with daily and weekly Mass attendees having a far more negative opinion of the second Catholic president than those who attend less often.

The president’s political woes among Catholics are not aiding the position of the Democrats in the six battleground states both on the Gubernatorial and Senate election fronts. In the races that will determine who controls the U.S. Senate, the survey found that the Republican candidates for the Senate were all in the lead heading into the midterms. In Arizona, Republican Blake Masters now narrowly polls ahead of Democrat Sen. Mark Kelly by 51.4-46.3%. In Florida, Republican Sen. Marco Rubio leads Democrat Val Demings by 59.1-36.9%. In Georgia, Republican Herschel Walker leads Democrat Sen. Raphael Warnock by 64.7-32.7%. Nevada Republican Adam Laxalt is ahead of Democrat Sen. Catherine Cortez Masto, 56.7-36.4%. And in Ohio, Republican J.D. Vance leads Democrat Tim Ryan, 55.5-41.0%. Once again, daily and weekly Mass attending Catholics are proving vital to the electoral advantage currently held by Republican candidates in the six states.

While the economy is the major driving force for Catholics as they decide how to vote in the midterms, the gambit by the Democrats to focus so intensely on abortion in the wake of the overturn of Roe v. Wade by the Supreme Court in June seems not to have succeeded. As seen, Catholics across the six states that were surveyed placed abortion a very distant third among the most important issues for the country, behind the economy and immigration/border security. While abortion remains a divisive issue for Catholics – despite the clear teaching of the Church against it – Catholics across every subgroup of Mass attendance do not see abortion as the most urgent issue for America for the election. In Nevada, for example, 46.2% of Catholics who attend Mass only once a year responded that abortion should be available to a woman at any time she wants one during her entire pregnancy. This is a shocking number, but only 2.8% of these Catholics believe abortion is the most pressing issue for the election.

At the same time, the vast majority of Catholics in all six states want restrictions or regulations on abortion. In Pennsylvania, 81% of all likely Catholic voters want some restrictions; in Florida, 82.5% want restrictions; and in Georgia 84% favor restrictions. This places most Catholic voters in opposition to the Democrat candidates who have largely opposed any restrictions on abortion and who have unanimously called for the codification of Roe v. Wade into federal law. When it comes to the question of the impact of Dobbs, by an average of 59.1% a majority of Catholics in the six states support the idea that elected representatives and ballot initiatives rather than judges and courts should decide the question of where abortion policy should be decided. This view would support the outcome of the Dobbs decision that sent the question of abortion to the states.

The Hispanic Catholic vote is another potentially significant group to watch in the mid-terms, especially as polling by EWTN News/RealClear Opinion Research has detected movement of Catholic Hispanics away from the Democratic party and towards the Republicans. This was shown in the September poll [https://www.ewtnnews.com/poll] which showed a marked decline in approval for President Biden from among Hispanic Catholics. The Hispanic Catholic vote in the battleground states varies in size, but three states worth looking at are Arizona, Nevada and Florida given their potential influence. In Nevada, President Biden has a job disapproval of 72.8% compared to 26.7% approval. In Florida, his disapproval among Hispanics is 60.2% and his approval is 35.6%.  Arizona’s Hispanics, on the other hand, comprise 31% of the state’s overall population, and within the Hispanic Catholic community, Joe Biden’s approval is an important outlier at 45.8% approval versus 52.3% disapproval. That modestly stronger support for the Democrat party carries over into the races for the Senate and Governorship, and Hispanic Catholics are supporting Mark Kelly over Blake Masters, 53.6%-46.4% and Katie Hobbs over Kari Lake 53.6%-46.4%. While the Hispanic Catholic population is small in states like Pennsylvania or Ohio, in Arizona it could prove the determining factor in several major races.

Each state is different, of course, with its own demographic, political and cultural dimensions. However, the poll found some important commonalities in the questions of Mass attendance and belief in the Real Presence of the Eucharist. Where the national average in the belief in the Real Presence has hovered around 50% in the EWTN News/RealClear polling over the course of multiple polls, Catholic voters in the battleground states collectively have a slightly higher acceptance (53.5%) of Church teaching that the transformed bread and wine are the Body and Blood of Christ and not symbols. Likewise, Mass attendance has been around 24% for weekly Catholics nationally. In the battleground states, weekly or more frequent Mass attendance is worth noting. While in Arizona (24.4%), Florida (22.1%) and Nevada (21.7%), weekly attendance rates are on par with the national average, weekly attendees in Ohio (30.6%), Pennsylvania (30.5%) and especially Georgia (41.4%) are notably higher. That translates into a potentially larger voting group that already is very unhappy with President Biden and his policies and that might very well help determine the balance of power in the U.S. Congress and influence American political life for years to come.